Throwback Thursday - The first Annual Meeting and the early years

If you’re on Facebook, you’ll be familiar with fun old photos people post on Throwback Thursdays. So this week, we’ll throwback a photo from the early days of the Association.

At the recent Annual Meeting, the Association rolled out its 85th anniversary history book. With lots of photos, timelines and stories, the book chronicles how the Association grew from an organization primarily focused on advocacy to a multi-faceted association providing a variety of programs and services to the state’s local elected officials and city staff. Click here to watch a short video that describes the book. 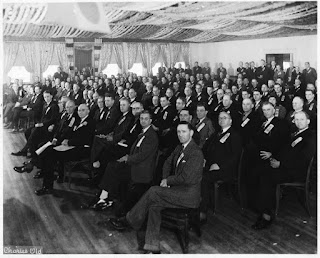 One of the many comments the Association received about the book is how its photos illustrate the gradual evolution of local elected officials from a white male dominated group to a more diverse cross-section that included an increasing number of minorities and women as time progressed. Look closely at this photo, and you’ll see one woman in the top right corner.

This Throwback Thursday photo is one of the earliest in the Association’s archives. This meeting in 1940 at Columbia’s iconic Jefferson Hotel was the Association’s first after hiring its first executive director, James N. Caldwell, in 1940. While mayors had been meeting informally since 1930 as the Municipal Association, the hiring of Caldwell marked the beginning of the formal organization we know today.

Before Caldwell’s hiring, Columbia’s city attorney, R.W. Wade, had been serving as secretary-treasurer of the loosely organized Association. He monitored legislation, prepared testimony and planned annual meetings. He was paid about $50 per month plus expenses during legislative sessions.

One of Association's top priorities Wade worked on in the early 1930s was getting state law changed to give cities with populations above 2,500 access to state funds to pave roads. Check out Chapter 3 in the book to learn more about this early legislative challenge. 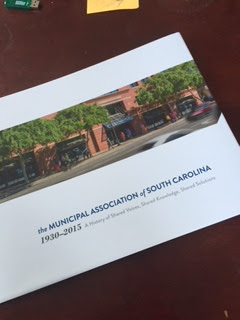 All municipal officials attending the Annual Meeting received a copy of the book, and the Association mailed a copy to every city last month. Additional copies are available for order here.
Posted by Municipal Association of South Carolina
Email ThisBlogThis!Share to TwitterShare to FacebookShare to Pinterest