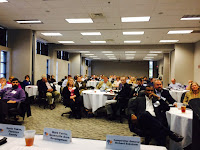 A room of close to 100 accountants, attorneys, economic development professionals, city and county staff, and state officials spent a day in Columbia this week learning about the many aspects of a recent change in how governments report economic development tax abatements on their financial statements.

The Government Accounting Standards Board recently released a new regulation, GASB 77, effective for reporting periods beginning after December 15, 2015. This new rule requires state and local governments to disclose on their financial statements any economic development incentives that would affect the entity’s ability to raise revenue.

According to GASB, the goal of this reporting requirement is to increase transparency of state and local governments to show how these incentives affect the entities’ overall fiscal and economic picture. 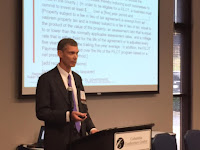 The morning session at the conference sponsored with the SC Economic Developers Association featured Edward Kluiters (left), an attorney with Haynsworth Sinkler Boyd P.A., and Larry Finney, CPA, an accountant with Green, Finney and Horton, discussing the technical aspects of implementing this new standard. Read their presentations to get detailed information about the financial and legal implications of GASB 77. (Finney additional handout) 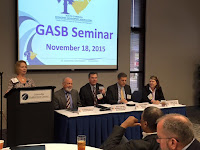 A panel discussion composed of government officials focused on the policy and practical implications of GASB 77. One common theme among the panel members was the importance of communication related to several aspects of meeting this new reporting requirement.

State Comptroller General Richard Eckstrom, who is responsible for preparing the state’s audited financial statements, said the new reporting standard is a positive in that it increases transparency. However, he acknowledged that it will result in additional administrative and reporting efforts.

Eckstrom emphasized that when talking about this new standard, it’s important to talk not only about the cost but also about the public benefit the government entity expects to receive in exchange for the abatement. There are many more advantages than disadvantages from these incentives, and being able to explain that aspect of using tax abatements as an economic development tool is important.

Ann Harty, chief financial officer in Rock Hill, noted that on the accounting and auditing side, communication among all of the government entities involved with an abatement is important since the reporting entity must get the required information from the entity providing the tax abatement. She noted that Rock Hill is already collecting this information in preparation for this reporting.

Kevin Yokum, finance director in Florence County, explained communication between economic developers who are making the deals and financial staff who would be implementing the abatements is key.

Disclosure doesn’t have to include only the dollars that will be “lost” with the abatement, stressed Mark Farris, president and CEO of the Greenville Development Corporation. He said, it’s important to also include in the notes to the financial statements how the incentive would benefit the community in the long run. 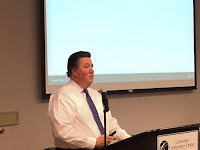 The day concluded with a presentation by Mark Simmons (left), a site selection expert and partner with Parker Poe Consulting. He stressed that his firm’s clients are interested in doing “fair” deals regarding incentives. While incentives help reduce both up-front and recurring costs, most of his clients recognize that local governments need to show a “return on their investment” and, thus, justification for their incentive deals.

He noted that these disclosures do not seem to require any additional information that would not already be considered public information and subject to disclosure through FOIA. Plus the requirements are universal and prospects will face the same rules in every state.

Simmons’ bottom line was that GASB 77 likely won’t adversely affect site selection activities in the state. Plus, as Eckstrom pointed out, these new reporting requirements are the rule of the land, and, despite the somewhat sensitive nature of the reporting, these disclosures give governments the chance to show the benefits of good economic development deals that benefit all.

Another good resource on the economic development implications of GASB 77 is this briefing paper from the Urban Institute.


Dams, debris and collaboration were three hot topics at this week's House Ways and Means committee meeting where state and local officials discussed the aftermath of the recent flood.

DHEC Director Catherine Heigel was first up to testify with a discussion of the various types of dams in the state and her agency’s responsibility for regulating certain types. When asked whether DHEC is the best agency for dam regulation, she said it is. However, she noted the agency is in need of more staff to meet its responsibilities.

Heigel, along with the local officials who gave testimony, reiterated several times how collaboration among government agencies and jurisdictions at the state, local and federal levels was key to the rescue and recovery effort. 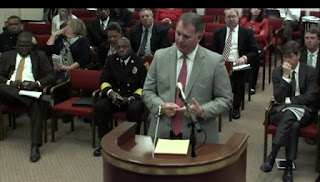 Deron McCormick, Sumter’s city manager, responded to Rep. Gilda Cobb-Hunter’s question asking if he thought collaboration and coordination among government entities in an emergency should be legislated.
McCormick responded that on–the-ground coordination worked well during the flood emergency, and it would be important to maintain the flexibility currently in place for government entities to help each other. McCormick had high praise for the coordination among the city, county and DOT in the rescue and recovery efforts. 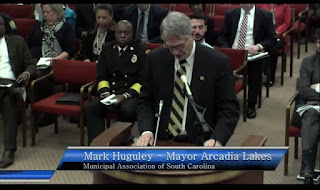 Arcadia Lakes Mayor Mark Huguley testified about how the flood damage has the potential to completely change the identity of his small town. He explained how his “Town of Seven Lakes” is now a town of four lakes, and these lakes were the reason many people brought homes there.

Huguley noted there are 16 lake front homeowners in the town who still don’t have direct access out of their neighborhood because of washed out roads. Then, he noted among other issues, there is the state road that runs over a private dam which DOT can’t repair until the dam is repaired.

Huguley closed his remarks by noting to committee members that the town doesn’t levy a millage and can’t, under current law, impose a permanent property tax to fund local service needs (state law allows for imposing a short-term emergency millage). This means the town could impose a temporary millage to mitigate the immediate problem but remains challenged in meeting long-term maintenance needs.

Sumter’s McCormick showed committee members photographs of the flooding at Sumter landmarks such as Swan Lake, the opera house and many city parks. He said there is substantial infrastructure damage in the parks with debris settling on park benches and dugouts. He noted that, unfortunately, FEMA doesn’t reimburse for what he called “quality of life” landscaping in parks.

McCormick described the major damage to the fire department training center and its equipment. Plus, he noted, seven police cars were inundated with water.

Columbia City Manager Teresa Wilson also testified about the collaborative efforts that took place in the Midlands area during and after the flood. She said city and county officials have remained in daily contact since the flood.

Wilson described Columbia’s destruction in terms of numbers. She noted two feet of rain fell in less than 48 hours, and that amounted to 11 trillion gallons. The annual rate is 45 inches a year. A 60-foot section of the Columbia Canal washed away. A 10-day boil water advisory affected 375,000 people. She said this was the first system-wide boil water advisory in anyone’s memory.

Wilson reported that 3800 tons of debris have been removed throughout the city, and this doesn’t include waterway debris. In terms of repairs, Wilson said the city has identified $1.5 million in road repairs, but she noted all the damage isn’t yet known. Plus there’s a $40 million price tag to repair the canal to its previous condition and another $50 million for future needs.

After hearing similar testimony from county officials, committee members heard from the state Revenue and Fiscal Affairs office with a report on revenue projections for the upcoming fiscal year.  Frank Rainwater, the state’s chief economist, reported an increase in recurring revenue for FY 16, $343 million, and FY 17, $380 million, plus a surplus of $131.4 million from FY 15.

What this means for flood recovery and the needs of other state agencies will certainly be a hot topic in the early days of the 2016 session.
Posted by Municipal Association of South Carolina No comments:
Email ThisBlogThis!Share to TwitterShare to FacebookShare to Pinterest

More than 70 city managers and administrators gathered in Columbia last Friday for their twice-a-year forum.

The Association's Tiger Wells reported on recommendations regarding a recent U.S. Supreme Court decision that affects local temporary sign ordinances. He and and Sumter City Attorney Eric Shytle shared what they learned at a recent municipal lawyers' conference about how cities may need to change their sign ordinances as a result of this ruling. There's more about this issue in the November Uptown.

Managers also got a briefing about the Association's 2016 advocacy initiatives, and Executive Director Miriam Hair shared details about progress on business license legislation introduced last session. Miriam talked through several business licensing processes that can be streamlined to be more business-friendly. 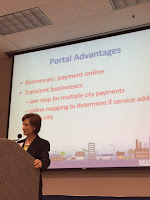 Plus Miriam rolled out the proposed statewide online portal that would allow businesses to pay their business license tax online. The Association's board of directors approved moving forward with this concept at the recent board retreat. Stay tuned for more information about this as planning progresses.

A representative of the Public Employees Benefit Authority laid out next steps for cities to comply with GASB 68. This GASB statement relates to reporting pension liabilities on annual financial reports. An article in the November Uptown gives details on this.

Managers also got information about a seminar regarding GASB 77 on November 18. This GASB statement relates to local governments reporting tax abatements on financial reports and goes into effect for reporting periods after December 15, 2015. Learn more in the November Uptown.The Association is sponsoring this seminar in partnership with the SC Economic Developers Association.