Bill to clear blight carried over in Senate committee

Listen to the City Quick Connect podcast for an interview with Scott Slatton about this hearing.


A bill resulting from one of the Association’s five advocacy initiatives was on the Senate Judiciary Committee’s agenda this week.

The Dilapidated Buildings Act is the solution proposed to the challenge of “clear blight” in the Association’s advocacy initiatives. As the Association staff has gathered input from local officials in recent years regarding challenges they face, dilapidated buildings have consistently been a priority for cities of all sizes.

For example the staff heard stories of dilapidated buildings such as a commercial structure owned by a defunct non-profit, a shopping center with a long-gone absentee owner and a property owned by multiple heirs of the original owner…all had fallen into disrepair and had become public safety and public health hazards.

In many cases, a city may have exhausted all of its options to abate the nuisance buildings and the only option remained demolition. However, demolition is expensive, and the city rarely recoups its costs to tear down the structure. At that point, the only option is to leave the structure standing as a public nuisance.

The DBA gives councils an additional tool by allowing the city to petition the circuit court to appoint a receiver who would then bring the building back to a safe condition. The legislation is very specific in ensuring property rights of the owner are protected. At the same time, it allows cities to do what’s in the best interest for surrounding property owners and neighbors.

At this week’s hearing, Senator Kevin Johnson (former mayor of Manning and past president of the Association) made a motion to carry over the bill so that concerns several senators had raised could be ironed out. Stay tuned for more as this bill continues to be debated this session.

Listen to what Scott Slatton, the Association’s legislative and public policy advocate, had to say about the hearing in this week’s City Quick Connect podcast. Keep up with what Scott is covering at the State House by following him on Twitter @ScottSlatton.
Posted by Municipal Association of South Carolina No comments:
Email ThisBlogThis!Share to TwitterShare to FacebookShare to Pinterest

Listen to this week's City Quick Connect podcast interview with Tiger Wells regarding this hearing.

Changes to the Freedom of Information Act were on the agenda of a Senate subcommittee this week.


This week, a Senate Judiciary subcommittee considered the House-passed bill to establish an Office of Freedom of Information Act Review within the Administrative Law Court.

H3191 also addresses fees governments can charge for filling FOIA requests and changes the amount of time a government body has to respond to a request.

The Association’s Tiger Wells, government affairs liaison, has been involved with a working group of legislators and other stakeholders to address concerns that had been raised regarding the bill after it passed the House. Senators decided not to report the bill out of subcommittee this week so this group could continue working to tackle issues raised during the meeting.

Listen to the City Quick Connect podcast for an interview with Tiger about what happened at the subcommittee hearing. Keep up with what's happening with this and other bills in the weekly legislative report.
Posted by Municipal Association of South Carolina No comments:
Email ThisBlogThis!Share to TwitterShare to FacebookShare to Pinterest

It’s the first week of the new legislative session and that means subcommittees of the House Ways and Means committee are starting to work on their budget recommendations.

The budget process generally takes the entire session to complete. The budget originates in the House and then goes to the Senate. Typically, House subcommittees start work in early January with recommendations going to the full committee in mid-February. The budget gets to the full House the week of March 7 then heads to the Senate where the process repeats.

It’s at the subcommittee level where committee members hear testimony from state agency representatives and other organizations interested in budget items such as the Local Government Fund. Subcommittee hearings are typically the one chance interested parties have to give testimony on budget items.

These meetings are usually fairly informal. This week’s hearing took place in one of the small meeting rooms rather than the large committee room giving it a more relaxed and intimate feel. 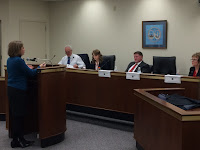 On January 12, Melissa Carter, the Association’s research and legislative liaison, appeared before the subcommittee to make the case for full funding of the Local Government Fund. She requested the Ways and Means committee increase the FY 17 Local Government Fund base funding to the level required by law.

Melissa went on detail the local government challenges from the floods in October. She requested the subcommittee consider funding the 25 percent match to FEMA and establish a fund for local governments to use for un-reimbursable flood damage expenses.

Hear more about what happened at the hearing in a City Quick Connect podcast interview with Melissa recorded after the hearing.

Ready, Set, Go! Be Prepared for the 2016 Legislative Session

It’s the first week of the new year meaning the impending start to a new legislative session! As usual, that has brought a flurry of pre-filed bills. All 77 affecting municipal government are now in the Association’s legislative tracking system.


A new session means a fresh look for the weekly report, From the Dome to Your Home, and the launch of our new podcast, City Quick Connect.

It’s also time to gear up for the 2016 Hometown Legislative Action Day on February 3. This is the time local officials gather in Columbia to learn about issues and how to advocate on behalf of residents and businesses in their cities and towns.

Instead of a keynote address this year, a keynote panel of leaders from three high-profile state associations will share their organizations’ legislative priorities and discuss how their issues align with issues important to cities and towns.

In this January Uptown article, Rogers talks about the long-standing relationship between the Municipal Association and the Press Association when working on legislative issues. He cites trust and a common belief in open government as the backbone of this relationship.

In addition to the traditional legislative panel, update on advocacy initiatives, visit to the State House and delegates’ lunch with State Superintendent of Education Molly Spearman, HLAD will feature a mobile tour of downtown Columbia. Participants will board a bus and learn about what the City of Columbia is doing to attract students, young professionals and new businesses to its downtown corridor.

A second panel features owners of a South Carolina-based craft brewery and a food truck discussing with representatives from their hometowns the economic development value of these budding industries in the state. Later, craft breweries from around the state will be showcased at the evening legislative reception where guests can taste and compare beers from these breweries.

The “Taste of SC” theme of the reception will let guests sample new twists on lots of South Carolina favorites such as boiled peanut hummus, warm collard dip, and fried chicken with mini waffles with peach sauce. Guests will also be able to vote on their favorite type of BBQ sauce. It’s a different twist on the legislative reception and will certainly be a fun time!

The deadline to get a hotel room at the conference rate at the Columbia Marriott is January 10. The meeting registration deadline is January 18. Register and reserve a room here.
Posted by Municipal Association of South Carolina No comments:
Email ThisBlogThis!Share to TwitterShare to FacebookShare to Pinterest
Newer Posts Older Posts Home