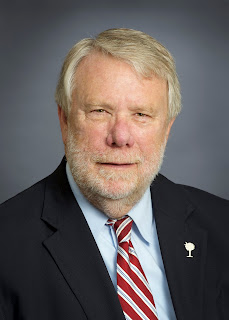 On behalf of Governor Henry McMaster, the S.C. Department of Commerce is pleased to announce that we will accept census tract nominations for the recently announced economic development program called Opportunity Zones.

As a part of the Tax Cuts and Jobs Act of 2017, Opportunity Zones are designed to encourage long-term private investments in low-income communities.This program provides a federal tax incentive for taxpayers who reinvest unrealized capital gains into “Opportunity Funds,” which are specialized vehicles dedicated to investing in low-income areas called “Opportunity Zones.”

The zones themselves are to be comprised of Low-Income Community census tracts and designated by governors in every state. South Carolina may designate 25 percent of qualifying census tracts as an Opportunity Zone.

Please note that Qualifying Zones are based on the 2011-2015 American Community Survey. Please click here to view a map of the census tracts.


To qualify, a census tract must satisfy the definition of “low-income community," to be nominated by the Governor and approved by the U.S. Treasury.


·        Census tracts qualify as an LIC if they are considered distressed or severely distressed:


§  Poverty rate of 20 percent or greater


§  Poverty rate of 30 percent or greater

Currently, South Carolina has 534 census tracts that qualify. As a result, up to 25 percent of those tracts (134) are eligible to be nominated by the Governor. The Opportunity Zone designations remain in effect for 10 years.

HOW TO NOMINATE A CENSUS TRACT

Provide examples of projects or potential projects within the census tract. Your census tract submission should include a balance of need and opportunity. Items for consideration are an area’s absorptive capacity for new capital, habitability for local entrepreneurs, and connection to markets, population centers, and anchor institutions that can play a critical role in facilitating growth in distressed locales.

Your submission should be no longer than one page per census tract.  If a community is requesting more than one tract, then the community MUST rank their census tracts in order of preference to be nominated as Opportunity Zones for South Carolina.

We are accepting submissions from only one official county, city or municipal representative of your local area. Nominations should be submitted by emailing your census tract nominations to OpportunityZones@sccommerce.com by 5 p.m. on Thursday, March 1.

Any questions concerning this nomination process should be made in writing to this same email address. To view a copy of the congressional bill please click here.
Posted by Municipal Association of South Carolina No comments:
Email ThisBlogThis!Share to TwitterShare to FacebookShare to Pinterest

Stay in the State House loop with social media reports

During the 2018 legislative session, officials in cities and towns can keep up with State House activities by following the Municipal Association's legislative team members who are live daily on Twitter. They are keeping local officials updated on what's happening in committee meetings, in the lobby, and in the House and Senate chambers.

This week, Scott Slatton (@ScottMuniSC) shared a series of tweets live from a House Education and Public Works committee meeting where members voted out the utility relocation bill. 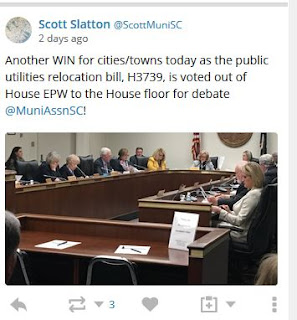 In a House Judiciary Criminal Laws subcommittee, Scott tweeted a shout-out to Rep. Gary Clary (@garyclarysc) who said that municipal courts should be included in the state's unified court system when it comes to indigent defense. Scott also reported on Tiger Wells (@TigerMuniSC) testifying before House subcommittee. 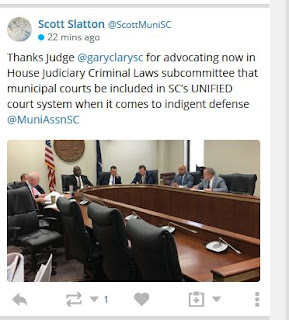 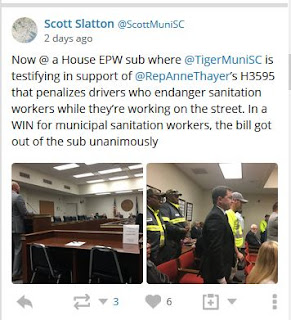 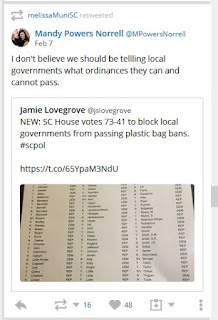 Councilmember Jenn Hulehan (@Jenn4ward3) from Simpsonville kept her constituents on top of everything she learned with tweets from a State House tour and other HLAD sessions.
Melissa Carter retweeted Sen. Mike Fanning (@FanningforSenate) photos of visits he had with local officials in his district during HLAD. 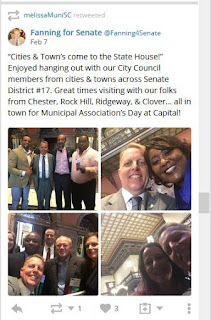 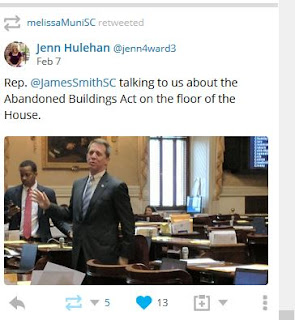 Cayce Mayor Elise Partin (@elisepartin), president of the Municipal Association, made sure to keep her constituents stayed informed about what was happening during Hometown Legislative Action Day with lots of retweets from panel sessions, the MEO Institute graduation and Agriculture Commissioner Hugh Weathers' (@HughWeathers) lunch speech. Each week, the Association's legislative report, From the Dome to Your Dome, is shared frequently through the Association's and the lobbyists' Twitter accounts. With more than 5,000 followers between these four accounts, local officials, legislators, reporters, hometown residents, business leaders and partner organizations all over the state have the benefit of staying on top of issues important to cities and towns. 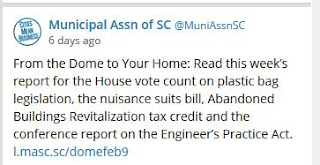 Want to stay in the loop? Make sure to follow @MuniAssnSC, @TigerMuniSC, @MelissaMuniSC and @ScottMuniSC.
Posted by Municipal Association of South Carolina No comments:
Email ThisBlogThis!Share to TwitterShare to FacebookShare to Pinterest

A movie ticket was $3.50. The winter Olympics took place in Calgary, Canada, and The Wonder Years debuted on ABC-TV. This was 1988 - also the year that the Municipal Elected Officials Institute of Government graduated its first class.

Technology, transportation, downtown development and delivery of public services have changed substantially over the past 30 years. One thing that hasn't changed is the need for newly elected city council members to get the training they need in the complexities of local government.

This year, the Municipal Elected Officials Institute is celebrating 30 years of graduates.
For anyone elected to serve as a mayor or member of a city council in South Carolina, the Municipal Association of South Carolina offers a variety of training opportunities that give local elected leaders the tools they need to make a seamless transition from candidate to elected official. The Municipal Elected Officials Institute is a multi-faceted training program designed specifically for mayors and city councilmembers. The Advanced Institute is available to graduates seeking additional training.


More than 1,600 local officials have completed the MEO Institute since 1988. This year, there are eight cities with councils that can count 100 percent of their members as MEO Institute graduates:


“People who run for elected office have a real passion and love for their communities.But when campaigning turns to governing, it’s kind of like starting a new job,” said Cayce Mayor Elise Partin, president of the Municipal Association. Partin graduated from the Institute in 2010.

“Most of us come to our roles in municipal service from professions and walks of life that might not have trained us on the mechanics of local government. And that’s great, because of diversity of experiences makes us better leaders, but we need to be prepared to lead our cities and towns too."

Immediately upon election, mayors and councilmembers can enroll in a free online course that covers five basics of governing - effective leadership, the fundamentals of city services and forms of government, basic budget requirements, effective meeting and agenda procedures, and the Freedom of Information Act and Ethics Act. This course is available on-demand through the Municipal Association’s website.

Once sworn into office, mayors and councilmembers can enroll in the Municipal Elected Officials Institute. The entire curriculum of 14 classes can be completed in one year through a combination of two day-long sessions and five streamed or online classes. The Institute uses local government experts, attorneys, business leaders, higher education instructors, and municipal government and Municipal Association staff to teach the sessions.
At the day-long sessions offered each February, topics include conducting public meetings, ethics and public accountability, planning and zoning, and business license administration.

The classes streamed to the councils of governments give local leaders a chance to get training three times a year without having to travel to Columbia. Plus they get the added advantage of networking and brainstorming time with peers in their region. To meet the goal of more flexibility in training, the online version of these classes are offered on-demand through the Municipal Association’s website.

During these streamed and online sessions, elected officials learn from leaders in both the private and public sectors about the importance of partnerships in economic development. They hear from staff with the Municipal Association and the SC Press Association about complying with the Freedom of Information Act. They learn how the three forms of government affect how a city is run and the mechanics and legalities of the municipal budget. 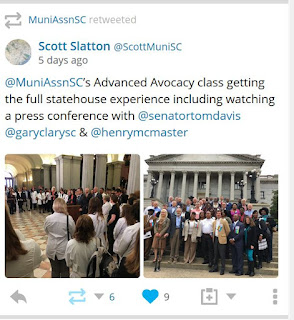 For graduates of the Municipal Elected Officials Institute, the Advanced Municipal Elected Officials Institute is available to give local officials more in-depth training on certain topics. Advanced Institute participants can choose between two advanced courses offered each winter and fall with the requirement of taking four of the six available classes to graduate. Launched in 2016, the Advanced Institute already has more than 150 graduates.
Time availability to attend training can be an issue for elected officials who often have full-time jobs outside of their council responsibilities. “We know that municipal elected officials have many responsibilities and time commitments, so the time dedicated to training must be well spent," said Wayne George, executive director of the Municipal Association.

George, mayor of Mullins, S.C. from 1988 - 2004 and a 1991 Institute graduate, was the first official from a city in Marion County to graduate from the Institute. 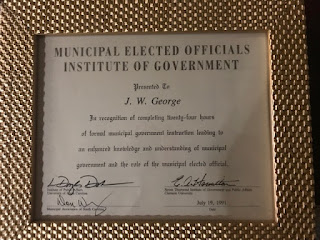 “We have tried to design a flexible training program that meets both the goals of gaining technical knowledge and sharing best practices with their peers in other cities,”  George said.