Week two of the Regional Advocacy Meetings wrapped up at the Clyburn Intermodal Transportation Center in Sumter for cities in the Santee Lynches COG.The building is former abandoned warehouse now serving as the headquarters for the Santee-Wateree Transportation Authority. There’s an interesting article in Architect magazine about the facility’s restoration. 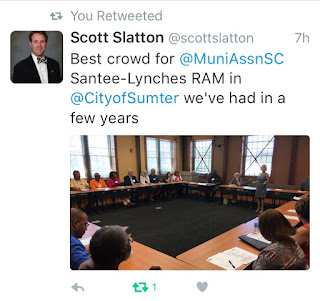 The City of Blackville hosted officials from the Lower Savannah COG cities at the Blackville Community Center. This building is another example of creative reuse of an old building - a former gymnasium built in the 1930s. More than 65 officials from 18 cities participated in this week’s meetings.

We’re beginning to see a pattern in many of the legislative issues that officials are offering up as challenges in their cities and towns: roads, enclaves, funding for priority projects, law enforcement, and upkeep of stormwater drains and ditches, to name a few. 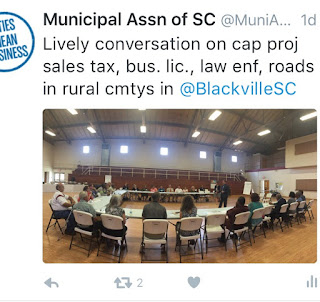 When asked about whether enclave annexation would be an issue in 2017, Scott Slatton, one of the Association’s lobbyists, noted that Rep. Mary Tinkler introduced H4834 in 2016. This bill would have allowed  cities to annex by ordinance pockets of land that are less than 25 acres and have been completely surrounded by the city for at least five years.

Late in the 2016 session, a House subcommittee approved the bill, but it was too late in the session for further action. “Since Rep. Tinkler is retiring, another legislator would have to take on sponsorship and leadership on this issue in the next session,” Scott said when asked about the possibility of the bill getting introduced in 2017. He encouraged local officials to talk with their delegation members about their interest in championing this bill. 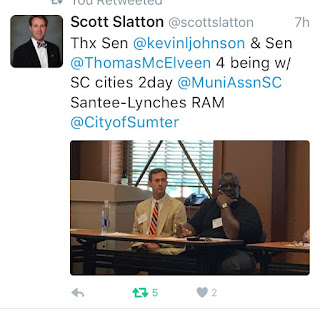 Senators Kevin Johnson and Thomas McElveen met with the officials assembled in Sumter to give their perspective on State House issues coming up in 2017. Senator McElveen explained why he strongly supported changes in the structure of the SC Department of Transportation last session, noting nothing new can happen if the agency continues to be governed the way it has been in the past.

Senator Johnson was encouraging about the idea of a municipal capital project sales tax that officials discussed. “A referendum could certainly make this idea more acceptable to some who may otherwise oppose it as a tax increase,” he said.

Both senators voiced strong support for the Local Government Fund as well as other municipal issues.

During the discussion part of the agenda, local officials at both meetings discussed a variety of issues including the Zika threat, accessing funding through the Rural Infrastructure Authority, zoning issues related to “tiny houses,” and funding for stormwater and wastewater needs. (Click the links for more detail about these issues.)

Last week’s blog post touched on the new laws concerning public prayer and ethics filings along with a court case regarding executive session and the Freedom of Information Act.

Next week, we head to Darlington, Beaufort and Greenwood. Learn more and register.
Posted by Municipal Association of South Carolina No comments:
Email ThisBlogThis!Share to TwitterShare to FacebookShare to Pinterest

Great turnout for week one of the Regional Advocacy Meetings

The first week of the Regional Advocacy Meetings are history with more than 70 local officials representing 20 cities attending the two meetings in Surfside Beach and Moncks Corner. 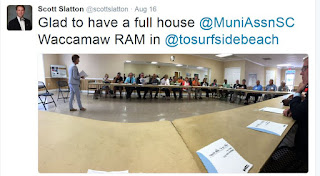 These 10 sessions held around the state in August and September let local officials weigh in on challenges in their cities that could be solved through legislation. Plus they get a chance to hear from local legislators who share their perspective on issues that will likely be top priorities for the 2017 session. Read this blog post to hear from Casey Fields with details about how the meetings work.

Transportation, annexation, public safety (recruitment and training) and business licensing were hot topics at both meetings this week.

Several legislators weighed in about how local officials can best make the case for city issues in the General Assembly.

"It's great to see you starting in August to talk about legislative issues," said Rep. David Mack at the Moncks Corner meeting. "Too often we hear from groups coming to us once the session has already started to tell us about their issues. It's nice to see you are getting started early." 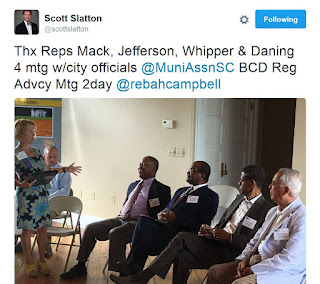 Rep. Joe Danning encouraged local officials to stay in touch with their local delegation before they need something. "We need to hear from you all year long and know what's important to you."

Prayer at public meetings. A 2014 U.S. Supreme Court case recently led to several changes to the South Carolina Public Invocation Act. First, prayers at meetings of public bodies must not seek to proselytize, advance or denigrate any one faith or belief.

An invocation is one that is delivered for the benefit of the public body (this includes council and any public body appointed by the council), not members of the public attending the meeting. So anyone who delivers an invocation at a meeting of a public body should direct the prayer to the body in an effort to mitigate the possibility of running afoul of the Supreme Court’s ruling. Additionally, public bodies should incorporate in their rules of procedures a prayer policy that uses the Act as a guide.

Meeting participants got a copy of this flow chart for a quick summary of these new requirements.

The staff and local officials have been actively tweeting this week from the RAMs with updates and photos. Keep up with what’s happening by following @muniassnsc on Twitter. 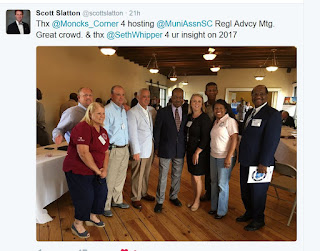 Next week, the staff heads to Blackville and Sumter. It’s not too late to register!
Posted by Municipal Association of South Carolina No comments:
Email ThisBlogThis!Share to TwitterShare to FacebookShare to Pinterest

With the uptick in the economy, we are seeing increasing growth and economic activity in South Carolina’s cities and towns. Take a look at the summer issue of Cities Mean Business magazine that focuses on how several cities are creatively growing their local economy. 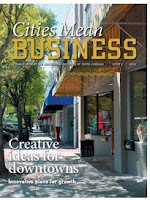 Tried and true approaches to economic development are changing and new strategies are showing results. Read about how Anderson, Hartsville and Greenwood are building on their strengths using creative tactics.

Recreation and leisure activities can be a critical part of a city’s quality of life. Find out how Pickens, Easley, Walhalla, Greenville, Travelers Rest, Eutawville and North Augusta are using trails to bolster tourism and business growth.

From a bustling urban downtown park to a quiet place to sit and take in nature, city parks also shore of the quality of life in our cities and towns. Walterboro, Greenville and Charleston are finding that passive parks give people places gather and connect.

A common theme we hear more and more these days is the idea that people want to engage more in their community. Learn about the concept of “placemaking” and how cities are working to create and sustain public places to build stronger communities.

Cities Mean Business is the Municipal Association's bi-annual magazine published as an insert in SC Biz magazine in its spring and fall issues. Read it online now or get a copy in the upcoming issue of SC Biz.


In the closing days of the 2016 session, the governor signed legislation regarding mutual aid agreements. Rep. Tommy Pope of York introduced H3653 at the request of the SC Sheriffs’ Association to clarify sheriffs’ authority to enter into mutual aid agreements without the need for county council approval.

The Municipal Association closely tracked the legislation and became involved as it moved through the General Assembly. We wanted to make sure that, in clarifying sheriffs’ authority, the Legislature didn’t cause confusion for municipalities, since police chiefs are still required to seek city council approval before they can enter into this type of agreement.

The legislation that ultimately passed achieved the goal of clarifying sheriffs’ authority while maintaining municipal council authority to authorize agreements between municipal police departments and other law enforcement agencies.

Importantly, the legislation also simplifies and streamlines the process of entering into mutual aid agreements by eliminating 23-1-210, 23-1-215 and 23-20-50. Municipalities operating under existing agreements that were executed based on those now-eliminated code sections should revisit them and any related ordinances or resolutions.

The Sheriffs’ Association has created a mutual aid agreement template to be used as a starting point for this type of agreement between sheriff’s departments and other law enforcement agencies. We anticipate that municipalities may be approached with these agreements in the near future, if they have not already been.

As always, the Association encourages anyone reviewing or helping craft this type of agreement to pay special attention to potential liability issues that may need to be addressed.
Posted by Municipal Association of South Carolina No comments:
Email ThisBlogThis!Share to TwitterShare to FacebookShare to Pinterest

Give your ideas for 2017 legislative session at Regional Advocacy Meetings

Jump in the car with your fellow local officials, buckle up and hit the road for an advocacy meeting near you. We will share a good meal, some fellowship and talk politics. I loved seeing everyone after Annual Meeting. The regional meetings keep the momentum going from such a great meeting in Charleston this year.

The Regional Advocacy Meetings start on Tuesday, August 16, in Surfside Beach at the Civic Center. If you haven’t already registered for one of the ten, do it now. You don’t want to miss this year’s lineup. It’s a little different so pay attention.

We will open up the meetings by looking ahead to big issues for the 2017 legislative session. Business licensing and police training are two topics that I’m sure will come up. Then, we will hear what’s on your mind about issues in your city or town.

This year we are inviting legislators to join us for a panel to discuss their opinions on big issues for cities and towns in the 2017 session. We are inviting specific members of your local delegation to participate in a panel discussion and to stay for lunch. We'll let you know which legislators have accepted our panel invitations as soon as we get confirmations.

Even if you think you and your General Assembly member love each other like family, you still have to work on it. Especially if you have a newly elected House or Senate member.

This is not a lecture-style meeting. It’s a discussion among the Association staff, you, your colleagues and your legislators. It’s designed to be fast-paced but thorough enough to walk away with some good information and next steps for the months leading up to the new session in January. 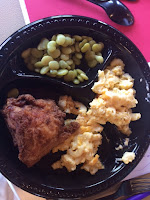 And we promise a great meal.

I know you are busy. I know you have a lot of other responsibilities including running your city and protecting your residents. I promise the Regional Advocacy Meeting will be time well spent.

Register now for a Regional Advocacy Meeting. Don’t miss the opportunity to tell your legislators what’s on your mind (kindly, of course) and hear what’s coming up for the 2017 legislative session. I can’t wait to see your smiling faces! Never too soon to start planning our strategy to advocate for strong cities and towns in our General Assembly.

Listen to Casey's podcast interview to get more details about the Regional Advocacy Meetings.