COVID-19, the reason why the Municipal Association of SC staged its first-ever Virtual Annual Meeting this year, also provided the primary topic of discussion for the conference. In a series of videos that remain available on the Municipal Association’s website, officials from various backgrounds dug into the effects of the ongoing pandemic and ways that cities and towns can address it.
During the Annual Meeting's live portion, Inman Mayor Cornelius Huff expressed regret that the meeting could not happen in person. He noted that city leaders face major challenges, ranging from the pandemic and its economic fallout to the renewed movement to end excessive police force issues.
“I know that together, as one team, as one South Carolina, we will make it,” Huff said. “But we have to do it together. We will work together to overcome our challenges and come out better on the other side.”
Here’s a few examples of the Virtual Annual Meeting video sessions:
South Carolina and COVID-19: Response and Recovery
Dr. Shaniece Criss is a Travelers Rest City Council member, and she also serves as a health sciences professor at Furman University. Criss joined State Epidemiologist Dr. Linda Bell to discuss the ways local government can help slow down the contagion. 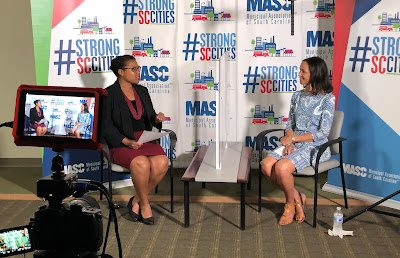 Bell noted that the prolonged period of disease transmission will likely remain a challenge, but cities and towns can take valuable steps at the local level. They can help with education on prevention, help build partnerships with community health providers, schools and the faith community to improve access to care.
Given the unlikelihood of a COVID-19 vaccination in the near future, Bell said that the most critical tools for protection of residents and protection in places of business remain high levels of physical distancing and the use of masks. She also noted that South Carolina had become nationally noteworthy for its virus spread, and that the spread had worsened among young people.
“There are people in the population who are putting us all at risk. As those behaviors continue, it’s going to prolong the period of time that we’re going to continue to see illnesses in our community, hospitalizations and even deaths. If communities can come together and recognize that this is not just for the individual, but it is a collective response that’s required,” Bell said.
Voting in a Pandemic: The Challenge That COVID-19 Poses To Elections in SC
South Carolina has now staged a primary election in a pandemic and faces a presidential election in November. Chris Whitmire, director of public information and training for the SC State Election Commission, explained the social-distancing challenges of elections in a conversation with Aiken Mayor Rick Osbon. 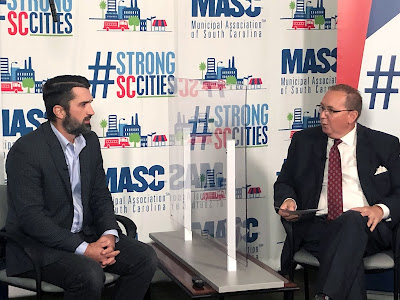 “The biggest issue is that elections today are conducted pretty much like they were 100, 200 years ago. We gather at a place, near where we live, in our neighborhoods. We gather together with our neighbors and we cast ballots,” he said.
For the June primaries, the General Assembly allowed all voters to vote absentee. The record for absentee ballots in primary jumped from around 60,000 to more than 200,000, Whitmire said. Also, the majority of absentees voted by mail, where in the past most absentee voters submitted ballots in person. If the General Assembly were to allow full absentee voting in November, he said, 1.5 million people could vote absentee, with 1 million of them doing so by mail.
Some issues making the voting process more difficult include the high-risk age of many poll managers, and fewer locations willing to serve as polling places, given the large volume of people.
“It will be key for everybody who’s eligible to be able to vote absentee, that will take the pressure off polling places on Election Day,” Whitmire said.
The CARES Act Explained
South Carolina received more than $1.9 billion from the Coronavirus Aid, Relief, and Economic Security Act, or CARES Act. It will be providing some of that funding to local governments as reimbursements for COVID-19-related expenditures, including $20 million for expenses that took place from March through June, and other funds for expenses made during the remainder of the year. Brian Gaines, division director of the SC Department of Administration’s Executive Budget Office, discussed the process with Municipal Association Executive Director Todd Glover. 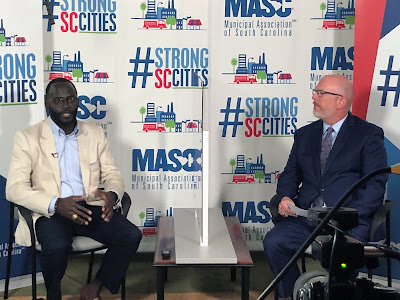 Glover noted that cities cannot use the funding for revenue replacement, and Gaines described some of the things funds can be used for — personal protective equipment, telework or telehealth expenses, testing and treatment, among others. The state has engaged the consulting firm Guidehouse, Inc. to vet reimbursement requests, and each city’s designated point of contact will make requests through an online portal, with some communication afterward about appropriate documentation.
“It’s not going to be as simple as uploading receipts and getting a payment back. You’re going to have to demonstrate that these are expenses that are directly related to COVID-19,” Gaines said.
The Virtual Annual Meeting webpage features all of the conference’s videos, including sessions on elected leadership, economic outlooks, police procedures, federal legislation and business license standardization.
Posted by Municipal Association of South Carolina
Email ThisBlogThis!Share to TwitterShare to FacebookShare to Pinterest

Special Event Considerations During the Pandemic

The battle of the bands. The local food festival. The summer soiree. These are some of the local gatherings that residents treasure, and have missed during the pandemic. Given the need for safe and responsible social distancing during COVID-19, when is it safe to host public events?

Last month, Main Street South Carolina and the South Carolina Festival & Event Association worked together on the accelerateSC guideline document Guidelines for Re-opening: Festivals & Events. The SC Department of Parks, Recreation and Tourism initiated the project and asked the two organizations to create a task force to develop this guidance.

Well-respected, seasoned event planners — including Main Street SC representation from Aiken, Florence, Greenwood, Hartsville and Laurens — spent weeks researching, deliberating, evaluating and proposing best practices. The document is designed to provide thorough and specific guidance to community festivals and special events across South Carolina. As a guidance document, it does not mandate or authorize what can and should be done. It does, however, provide considerations to evaluate when making decisions about public events:


For crowd capacity, another accelerateSC guideline document can be instructive — Guidelines for Re-opening: Mass Gatherings or Large Community Events. This particular document strongly recommends no events over 250 attendees, and notes that the cutoff threshold is at the discretion of community leadership. It also suggests criteria to think about when considering postponing or canceling a large gathering.

If in-person is not possible at this time, evaluate alternatives. Host virtual activities via online platforms or revise events in a way that can help reduce risks. Newberry, for example, is offering its summer outdoor movie series as a drive-in experience. Bennettsville also took this approach to its Fourth of July fireworks show.