Be prepared - what cities need to know about Zika

With the recent emergence and rapid spread of the Zika virus abroad, government leaders at all levels have been working to understand the disease and how to prevent, detect and respond to it. Although no cases of local mosquito-borne transmission of the Zika virus have been confirmed in the United States, there have been dozens of travel-associated cases reported. 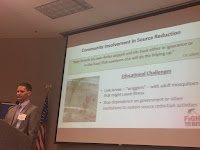 Chris Evans, public health entomologist with DHEC, briefed city managers today about the Zika threat. His power point is linked here along with a lot of other good local government resources.

According to the Centers for Disease Control and Prevention, Zika will continue to spread and it will be difficult to determine how and where the virus will appear over time.

Local government officials have a key role to play in preventing and responding to the threat of Zika through mosquito abatement and public education.

The South Carolina Department of Health and Environmental Control recently convened a forum of state and local officials to discuss the Zika virus and resources available to local governments in recognition of their role as the front-line defense against the spread of any mosquito-borne viruses.

While some cities and towns have their own mosquito abatement plans to destroy mosquito breeding areas and spray pesticides, the best option for many may be to partner with their county government through intergovernmental agreements for mosquito abatement, particularly spraying.

Educating the public about the dangers of mosquito-borne illness should be an integral part of any mosquito abatement plan. Public information efforts about the virus and how to stop its spread are prime opportunities for local officials to use all available communication tools, including social media.

More information and links to resources are available at www.masc.sc (keyword: mosquito abatement). Plus there will be a session at the Annual Meeting focusing on this topic.

Listen to the City Quick Connect podcast interview with the Association's Tiger Wells answering questions about this recent ruling.


The SC Supreme Court recently ruled in the case of Brock v Town of Mount Pleasant regarding executive sessions. Brock alleged the town violated the Freedom of Information Act by listing an executive session on its agenda but not indicating council would take action after the executive session.

This ruling indicates a public body, after exiting executive session, may only take action on a matter discussed during the closed session if the agenda acknowledges the possibility of that action.

In light of the changes that were made to the FOIA law’s notice provisions in 2015 following the Lambries case, this rule also likely applies when a regular or special meeting agenda is amended to add an executive session regarding a topic that was not included on the agenda published prior to the meeting.

The Association's Tiger Wells discusses this ruling and answers questions on the City Quick Connect podcast.
Posted by Municipal Association of South Carolina No comments:
Email ThisBlogThis!Share to TwitterShare to FacebookShare to Pinterest

Annexation bill on deck this week

Earlier this year, South Carolina Representative Mary Tinkler (D-Charleston) introduced the Local Government Efficiency Act in the General Assembly. If passed, H4834 would allow cities and towns to annex enclaves into their municipal limits. Enclaves are properties that are completely surrounded by a city but not within the municipal limits.

This bill is scheduled for a hearing on April 13 at 9:30 a.m. in the Special Laws Subcommittee of House Judiciary chaired by Rep. Jenny Horne.

“The bill‘s sponsors—eight Republicans and four Democrats—clearly show that the challenges posed by enclaves are not partisan,” said Scott Slatton, the Association’s legislative and public policy advocate.

Bill cosponsor Representative Kit Spires (R-Lexington) expressed his desire to reduce enclaves after hearing from Pelion Mayor Barbara Smith-Carey about the issues her town faces when dealing with enclaves.

“I support all efforts to encourage efficiency within government,” explained Representative Neil Collins (R-Pickens), another cosponsor. “I applaud Representative Tinkler and H4834’s intent to allow municipalities to better offer public services to their areas.”

Enclaves create irregular borders and pockets of unincorporated areas that lead to confusion about which properties are in or out of a city. That confusion leads to delayed or inefficient delivery of services from the mundane like trash collection to potentially life-saving services like police and fire.

The Local Government Efficiency Act would allow a city council to annex, by ordinance, properties of 25 acres or less that have been surrounded by the city for five years or more.

The 25-acre threshold was determined after Association staff consulted with city and town managers and administrators from across the state. They indicated that the bulk of their city’s enclaves were 25 acres or less and that those enclaves were the greatest challenges to efficient service delivery.

If the proposed Local Government Efficiency Act becomes law, the city must notify owners of the enclave properties proposed for annexation of the city’s intention to annex their property. The city must also hold a public hearing conducted at least 30 days before first reading of the ordinance to annex.

The notice provisions in the bill are consistent with those in current law dealing with municipal incorporation, zoning and other land use measures.

Learn more about enclave annexation here.
Posted by Municipal Association of South Carolina No comments:
Email ThisBlogThis!Share to TwitterShare to FacebookShare to Pinterest

Summer is just around the corner and that means activities in our city parks and recreation facilities ramp up. The April Uptown is full of great information about new things going in city recreation programs.

While active parks such as playgrounds and ball fields may offer the most obvious physical benefits, passive parks, with their benches, trails or greenspace, also play an important role in the community’s well-being. The April Uptown also features diverse passive parks in Greenville, Walterboro and Charleston.

Gone are the days when public parks consisted solely of some children’s swings and slides. New sports options such as Quiddich, ultimate frisbee and disc golf increase options for participation in city rec programs. Find out how Rock Hill, Conway, North Myrtle Beach and Barnwell are offering a wide variety of programming to attract everyone from youngsters to senior citizens. Read also about the growth of sports tourism in Rock Hill.

While these diverse parks and recreational facilities mean more opportunities for residents, they also increase the potential for injury and liability claims. Read about what city officials need to know to evaluate all risks to reduce potential liability.

Finally, read about what Education Superintendent Molly Spearman told local officials at Hometown Legislative Action Day about the great potential for city parks to partner with their local schools for strong after-school and summer programs.