Cities paying it forward after the hurricane...stories of grace and gratitude

When it comes to showing South Carolina’s big heart and ability to help our neighbors, we don’t need to look any further than the devastated Pee Dee Town of Nichols.

There are lots of great stories of cities helping cities after the hurricane. These are just a few:

While Hurricane Matthew pounded the coast, many small inland towns were left reeling from the flooding. There are many stories of humility, grace and gratitude from these devastating events. One example is Edisto Beach Mayor Jane Darby who used Facebook through the storm recovery to keep residents and homeowners updated on the progress of cleaning up their island home.

But Mayor Darby didn’t forget there were other South Carolinians who continued to struggle. She used Facebook to help pay it forward to the Town of Nichols and let her followers know that almost everyone in Nichols lost their home and belongings to flooding. She wanted to help and posted this plea: 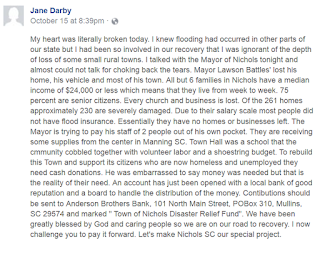 When the emergency distribution center closed in Edisto Beach, the mayor and city officials sent the remainder of the supplies that had been donated to Edisto Beach to Nichols … a great story of paying it forward. 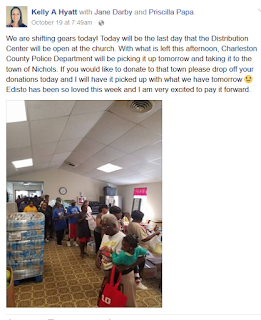 The City of Cayce also lent a helping hand to Nichols by sending public safety officers to help with search and rescue operations immediately after the storm hit. 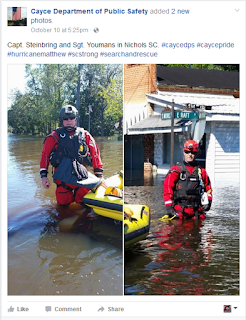 Then, the Cayce Department of Public Safety and the North Charleston Police Department were two of many local law enforcement agencies that collected goods for people in Nichols. 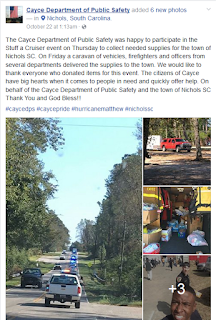 Just yesterday, House Speaker Jay Lucas of Hartsville took a trip to Nichols to see the devastation first hand. Watch this WIS-TV news report and read this Florence Morning News story to get a snapshot of what Speaker Lucas saw on his visit.

The Speaker recognized a top priority right now is getting the city government back up and running so residents can be assured of police and fire protection. Speaker Lucas also pledged to be the town’s legislative voice to try and identify funding for rebuilding since its local representative has retired. 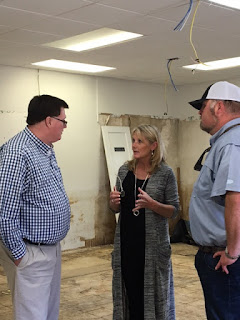 But that’s what we’re all about in South Carolina….paying it forward and helping out. These are just a few of the stories. Got more? We’d love to know about them.


Posted by Municipal Association of South Carolina No comments:
Email ThisBlogThis!Share to TwitterShare to FacebookShare to Pinterest

Shout out after the storm ... "electric cities" chip in to help each other

It’s easy to write that disaster recovery plan but, when the hurricane strikes, the real proof of the plan’s worth becomes evident. That’s certainly the case with the mutual aid agreement among the state’s 21 “electric cities” that run their own electric utilities.

All 21 of these municipal utilities are members of the South Carolina Association of Municipal Power Systems. The original purpose of SCAMPS, when it was established in the 1980s, was to serve as a vehicle for mutual aid during emergencies. Today SCAMPS, as an affiliate of the Municipal Association, also provides training for its members and advocacy related to utility issues in the legislature. 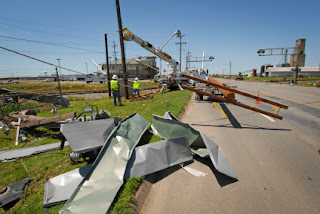 These municipal-run utilities were established to provide a nonprofit, community-owned and locally controlled source of reliable electric power. Governance by an elected council or utility commission allows the policies and decisions affecting electric rates and system operations to be tailored to the specific needs and priorities of the local community.

A hallmark of public power is system reliability. The SCAMPS utilities participate in a mutual aid assistance compact which pledges the availability of equipment, manpower and resources in emergency situations to restore power in affected utilities.

Rock Hill’s Electric Utility Director Mike Jolly responded with the core team sent to Orangeburg which was the hardest hit SCAMPS utility. There were approximately 15,000 customers without power in Orangeburg.This WIS-TV story that ran on Friday features Mike and the crew’s work in Orangeburg.

In addition to Orangeburg, mutual aid resources were dispatched to Bennettsville and Georgetown. The mutual aid response involved approximately 140 people including 69 SCAMPS-member employees, 16 private utility or tree company employees, and 52 employees from out of state public power utilities from Alabama, Florida, North Carolina and Nebraska.

Roughly 117 people were deployed to Orangeburg, 13 to Bennettsville and nine to Georgetown. The majority of these crews worked from Saturday October 7, through Thursday, October 13. SCAMPS had a 100 percent participation rate in the response by the utilities that were not seriously affected by the storm and employed more than five lineman.

The Municipal Association also served as a clearinghouse for providing information to the SC Emergency Management Division each day regarding the progress of restoring power in the three hardest hit cities of Orangeburg, Georgetown and Bamberg. Eric Budds, the SCAMPS contact for the Municipal Association, stayed in daily contact with EMD to update outage information that the governor incorporated into her daily reports.

During the storm, utility directors were busy at work focusing on the outages. Read this Uptown article to learn more about what a utility director does on a usual daily basis.
Posted by Municipal Association of South Carolina No comments:
Email ThisBlogThis!Share to TwitterShare to FacebookShare to Pinterest

Cities helping cities during the hurricane

It’s been quite a week for South Carolina cities hit hard by Hurricane Matthew. We’ve moved into the recovery period where cities are reaching out to help others in need. 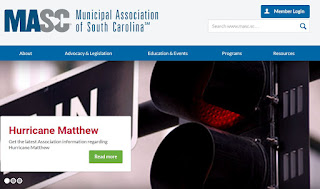 The first news block on the Association’s website has up-to-date information for cities regarding mutual aid requests, as well as documents from the state Department of Transportation related to debris cleanup.

Twenty-one cites in South Carolina run a municipal power system and are members of an affiliate organization of the Municipal Association called the SC Association of Municipal Power Systems. These utilities stay in close contact with one another whenever widespread power outages occur. Hurricane Matthew was no exception.

As soon as the governor declared a state of emergency on October 5, utilities in these electric cities outside of the target of the storm started getting resources ready to send lineman crews out to help out electric cities in parts of the state that needed it.

Utility directors are busy helping get the power back on today, but if you want to know more about what they do on a regular day, read this article from Uptown to learn about a utility director’s various responsibilities.
Posted by Municipal Association of South Carolina No comments:
Email ThisBlogThis!Share to TwitterShare to FacebookShare to Pinterest

At last Friday’s fall forum for managers/administrators, the new director of the SC Criminal Justice Academy, Jackie Swindler, addressed more than 50 managers and administrators about some of the concerns and challenges he’s looking at in his new position. 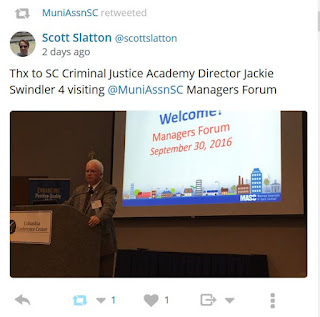 Swindler has more than 40 years in law enforcement and is the former long-time chief of police for the City of Newberry. Most recently he was the law enforcement liaison for the SC Department of Social Services.

Here are five take-aways from Swindler’s conversation with the managers and administrators:

1 - The CJA is funded by fines and fees from tickets, but that could change. Swindler will be asking the Legislature for a permanent line item of funding instead. One of the Municipal Association’s 2017 advocacy initiatives lends support to this change to CJA’s funding stream.


2 - Training could be coming directly to police departments in their own cities. Swindler is requesting state funding to dispatch a mobile team to go into four regions of the state to do ongoing training at local departments.

3 - If the legislature approves this new CJA budget, Academy training for new officer certification will be increasing from 12 weeks to 15 weeks. What’s in the extra weeks? Increased diversity training and a focus or making sure officers don’t put themselves into situations where shooting a gun is the only line of defense.

“Those additional three weeks will be … all about where you position yourself, how you posture yourself, use of force, arrest, verbal judo, de-escalation, cultural diversity, prejudices, biases, all those things will be taught, Swindler said. "Most of our situations happen as the result of how we communicate and then how it escalates. If we are able to have the additional three weeks, those will be some really good hands-on weeks.”

4 - Psychological tests are important. Swindler is requesting in his budget enough money to be able to reimburse police departments for psychological tests they administer to job candidates. “You do the test, send us the invoice, and we’ll pay you. I strongly encourage you to use psychological (screenings),” he said. “I know it’s hard on some budgets to be able to do that. It’s being asked of us throughout the county. The public is saying, ‘please vet your officers.’”

5 - Remember to report new hires to the CJA within 72 hours. It’s the law, after all. “We got one in the same envelope that was the hire form and the fire form,” said Swindler.

Swindler recently participated in a law enforcement task force hosted by the Municipal Association where stakeholders came together to discuss many of these challenges. The task force will continue to meet throughout the fall.